The experience of former NRL player Robert Mears saw the Macarthur Bulls edge out Manly/Sea Eagles 22-16 in the Grand Final of the Police Rugby League competition.
With the scores tied at 16-all and four minutes remaining on the clock, Mears crossed for what turned to be the match-winner.
On the last tackle and the Bulls pressing the Manly try line, the Sea Eagles players had their sights set on a possible field goal and raced out of the line.
The quick thinking Mears was able to see the opposition racing out, threw the dummy and then raced over untouched to score behind the posts.
The Bulls opened the scoring in the ninth minute after Manly had the better of play. A high bomb was allowed to bounce by the Sea Eagles and Daniel Drewe was able to kick ahead and score wide out.
Manly bounced back with two tries in five minutes, both to winger Mick Fortier to lead 10-4 but the Macarthur Bulls made it 10-all at the break when Mears burrowed over to score from dummy-half.
Manly centre Lee Cameron almost scored early in the second half but knocked on trying to get to the ball.
The Macarthur Bulls hit the front in the 46th minute when Manly winger Andrew Weight failed to take a high bomb cleanly and Drewe was on the spot to score his second try of the night.
Three minutes later, it was level at 16-all when Manly half-back Jai Jones elected to run the ball on the last tackle. A great pass put?Cameron over and he managed to improve the position for his kicker Matt?Ross.
Both teams tried to gain the advantage in what was a high quality match between the two sides.
The Police Rugby League returned to a traditional Wednesday night competition for the first time since 2006 after staging annual week-long tournaments on the north coast of New South Wales.
The same eight clubs that were involved this season will continue in 2014.

In the Plate Final, there was no love lost between the Bankstown Giants and the Penrith Panthers with one player sent off and two sin binned.
Penrith full-back James Dine was sent off by referee Stephen?Clark for allegedly throwing the ball at the whistle-blower.
That came just before Billy Lamisi (Bankstown) and Steve Hyde
(Penrith) were sent to the sin bin after being involved in a fight.
In the end, the Bankstown Giants proved too strong, running out 22-10 winners.
They led 16-0 at the half-time interval thanks to tries from Clayton Perkyns, Matt Spears and Chris Vea.
Penrith opened their account in the 37th minute when James Dine scored after Kyle Jones collected a lost ball from Perkyns.
Vea took an inside pass from Adam?Gillett to score his second try of the night before Luke Middleton crossed for the Panthers.

To all of those involved in the NSWPRL for 2013, the players, officials, referees and supporters, thanks for your involvement and support for a fantastic year of one of the best things of the NSW Police force. Well done to you all and see you all in 2014. NSWPRL Committee 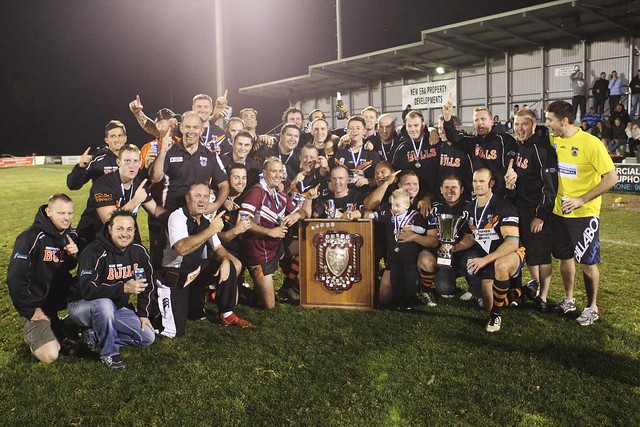